“The Jessica Soho Presidential Interviews” set the bar high for future election specials with GMA News and Public Affairs pillar Jessica Soho boldly asking four of the leading presidential aspirants tough questions about the controversies thrown at them, their stand on pressing issues, and their concrete plans should they be elected. The three-hour long television special became the most-talked about subject the past week: receiving rave reviews, dominating weekend programming, and registering historic online milestones.

The special's highly successful TV airing was heavily supported by advertisers at the same time.

The Jessica Soho Presidential Interviews also took the internet by storm. Its official hashtag (#JessicaSohoInterviews) dominated Twitter’s trending topics both in the Philippines and worldwide within minutes of airing, generating over 290,000 tweets.  It remained the top trending topic in the Philippines until Sunday and re-entered the list on Monday morning. Likewise on Facebook, the much-anticipated special chalked up over 4.1 million engagements, the livestream across several GMA channels generated over 3.6 million views while on Tiktok, it attracted thousands of eyeballs among the younger demographic.

On YouTube, the livestream on GMA News and Public Affairs’ channel reached over 230,000 peak concurrent viewers. It became the top trending video on the platform shortly after the special ended. The video has amassed over 5.2 million views as of January 25.

Viewers and netizens were all praises for Soho, who boldly asked the presidential aspirants the questions that need to be asked – their intentions behind running for the position, the controversies thrown at them, their stand on pressing issues, and their concrete plans should they be elected. Soho also threw unexpected and revealing questions to the presidential aspirants for viewers to get to know them better.

On Twitter, Richard Bolisay (@richardbolisay) commended the research team behind the special and lauded Soho for her extensive way of asking the relevant questions. “Tinde ng research team ng #JessicaSohoInterviews!!!! Jessica Soho for Pulitzer Prize in Journalism!!!! ‘All it took for you to change your [political] stand is a Netflix movie.’ QUOTE OF THE YEAR madam pahingahin mo naman kami.”

Tarra Quismundo (@TarraQuismundo) also took note of GMA News and Public Affairs’ comprehensive research on various issues that previously involved the presidential aspirants: “Jessica Soho's questions are just 🔥 🔥 🔥 And kudos to @gmanews researchers for going deep to prepare for this! 💯 The throwback to old tweets to probe consistency 👌 #JessicaSohoInterviews."


Jason Tan Liwag (@jaseybel)  praised the team as well on how the  order of questions was organized: “Kudos rin to the #JessicaSohoInterviews team for not only the well-researched questions but also the order these questions are asked. They create escalating stakes and expose deeper inconsistencies. No politician must be left unchallenged after tonight.”

Netizen @richardmz13 also tweeted: “Jessica Soho and her team set a high standard for future presidential interviews & debates. This is just the beginning so the Filipino people should keep on monitoring and listening 'cause 2022 can MAKE or BREAK us. #JessicaSohoInterviews.”

The special also aired on GMA’s flagship international channel GMA Pinoy TV and was also simulcast via the Network’s flagship AM station Super Radyo DZBB 594khz and all its Super Radyo stations nationwide.

The Jessica Soho Presidential Interviews is the maiden offering of GMA Network’s Eleksyon 2022 series of election specials and is part of the Network’s Dapat Totoo advocacy campaign.

Viewers who missed the January 22 airing can catch the replay this Sunday, January 30, at 9:45 p.m. on GTV. 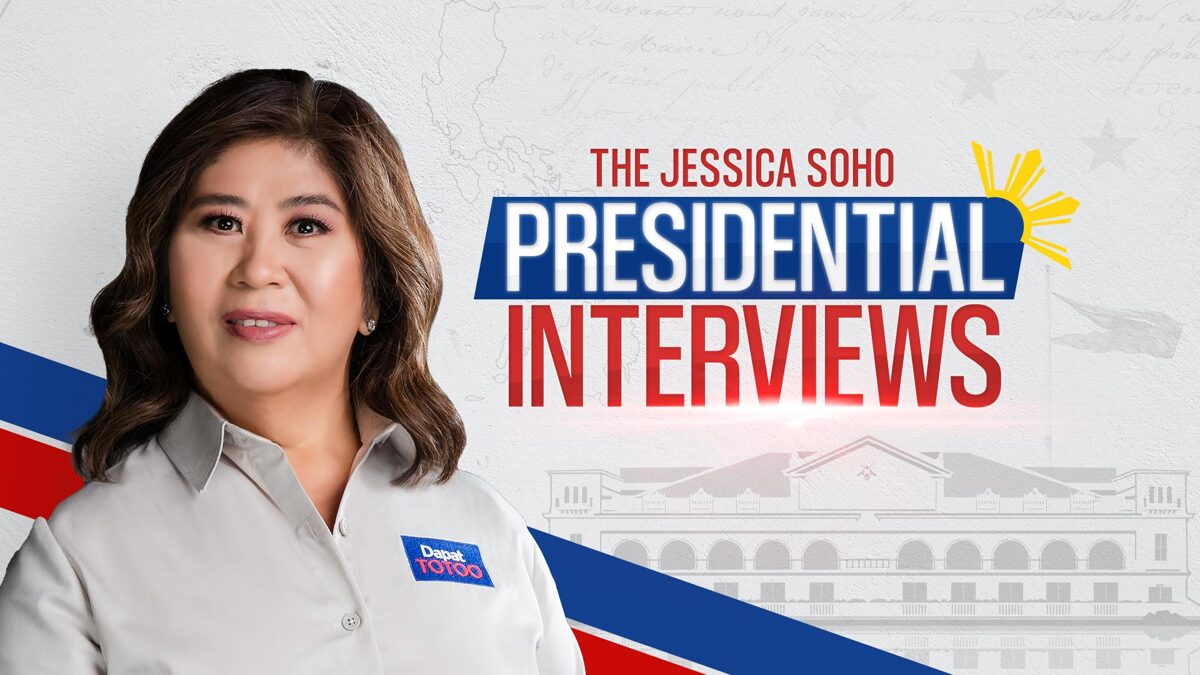