Feature Story: A PWD’s story on surviving the siege and its aftermath

Escaping the Marawi Siege on May 2017 was more difficult for Yusoph Edris, 35 and a person with disability (PWD), with his family on May 2017. Three years after the liberation of Marawi, his family is now walking to rebuilding their lives.

His family used to live in Raya Madaya I in Marawi City with his wife, Epi Ibra, 37, and three children.

He said that his left leg suddenly swelled up to almost the size of a basketball in 2014. They thought that it was because of diabetes.

However, because they did not have the money to have his condition properly checked, they were only able to see a doctor in Marawi City. Without any other examinations, the doctor can only conclude that it might have been cancer and had recommended that he see another doctor in Iligan City, about 50 kilometers from Marawi, for second opinion and for amputation.

They did not have the money to take him to Iligan City, neither did Yusoph want to lose a leg.

“Before, he (Yusoph) wasn’t able to go out of our house in Raya Madaya for 20 years. The first time he went out was when we had to flee from the war in 2017,” said Anisa Yusoph, Yusoph’s daughter

On the day they fled from the siege, Yusoph needed to be carried by the shoulder by family members. He shared that they had to literally drag him to cross Pumping Bridge by foot in the midst of all the exchange of fires because they had no vehicle. When they catched a glimpse of men in black shirts, members of the Daesh group, they can only keep going.

While crossing the bridge, he begged his cousins who carried him to just leave him on the bridge and save themselves. They refused to leave him behind and continued to drag him just so they could cross the bridge together alive.

Fortunately, at the end of the bridge, a tricycle passed by them and saw that they had a patient with them. The driver offered them a ride out of the city.

Community and Family Services International (CFSI) first met Yusoph in their tent in Bito Buadi Itowa Evacuation Center in Marawi City in 2018 where he was temporarily relocated after the war. His family lived under a tent for almost three years.

Using the profit they earned from the support, the family then started exploring more means to gain income by selling viands and accepting laundry jobs.

He and his wife is now able to earn as much as Php700 a day.

Yusoph was proud that ever since he received the support, he and his family is no longer dependent on the relief goods distributed to the IDPs and can now better provide for them. He can now also afford to buy the medicines he need for his aching leg.

CFSI’s MRP also assisted Yusoph in applying for a PWD ID. He shared that it was his only valid ID which he used to claim benefits and support from the government.

Yusoph’s family were then relocated to a sturdier temporary house in October 2019 by the Catholic Relief Services (CRS) in Barangay Sagonsongan, Marawi City. His wife, Epi Ibra, said that they are now more comfortable because they have their own toilet and a house made of concreate.

He also recently received Certificates of Live Birth (COLB) for him and his wife with the assistance of CFSI. He was able to use the certificates for hospitalization to see a doctor about his leg. Since 2014, he has not seen a doctor again for a check-up.

He also received crutches from CFSI MRP which not only allowed him to go out of the house, but also to personally go to government offices such as DSWD to claim IDP benefits for his family, as the head of the household.

“We hope that the war would not happen again, especially that it would be difficult to flee again, given the case of my father, Anisa shared, looking back at the war three years ago.

Epi said that they still need have Yusoph see another doctor for his leg and to get medicines to ease its aching. They are also affected by the effects of the province-wide quarantine imposed against COVID-19 but because of the support given to them, they were able to get by and is able to provide for the needs of their family.

“We are also thankful for the help from CFSI. Without them, we would not have been able to make it this far,” she said.

After surviving the siege and its ravaging effects, Yusoph and Epi, at present, continues to walk to rebuilding their lives for their family. (CFSI) 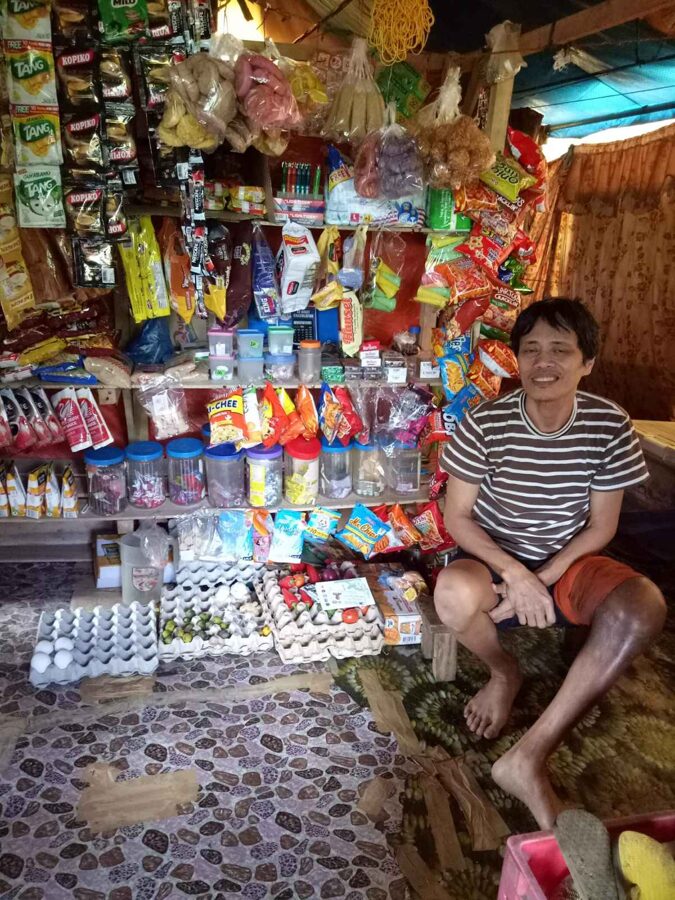 After running from their home devastated by the siege in Marawi and being temporarily shelter in a tent for about three years, Yusoph’s family is now able to become self-sufficient and is now walking towards rebuilding their lives (Photo by Riz Sunio).