Feature: Former OFW: An entrepreneur in the making

MAMBAJAO, Camiguin (PIA)--“Success is a combination of preparation, hard work, perseverance and humility.”

These are the words of former Overseas Filipino Worker (OFW) Ronnie C. Ocaba who worked as a pastry maker for four years in a company in Saudi Arabia, which distributed their products to various Starbucks cafes across the country.

Due to the pandemic, Ocaba returned to his home province.

Ocaba acquired his baking skills from his uncle while he was still a student in elementary and secondary education.

He spent his weekends as a helper in a small bakery shop in Sagay town. He also honed his cooking skills by being an assistant cook in different restaurants in the town.

Ocaba was able to finish a two-year course on automotive-mechanics in Cagayan de Oro City.

After his graduation in CY 2000, Ocaba worked as a baker at Don Miguel Bakeshop and did some part-time jobs at Dynasty and Pryce Plaza hotels in Cagayan de Oro City as a cook.

He then became a full-time cook at the RVM-operated retreat house in Malasag, Candy’s Restaurant, Victoria’s Grill and LEO’s bar before embarking to a “greener” pastures in KSA.

Moreover, in 2014, Ocaba tried his luck in a pastry company in Jeddah, KSA that supplied pastries to the different shop outlets of Starbucks with a starting salary of P28,000.

With dedication and consistency in his work, his employer transferred him to the main office of the company in Riyadh, KSA, covering the entire areas of Central and Eastern regions of KSA.  A big chunk of his income went to financially help his brothers and sisters in the island of Camiguin.

Ocaba then decided to go home for good in the later part of 2019 bringing with him a meager amount of savings, which he gave to his sister through money remittance.

Unfortunately, he lost the receipt of the money remittance and failed to send it to his sister.  He made several follow ups with the remittance center but to no avail, which led him to seek the assistance and appear personally at the Department of Foreign Affairs (DFA) in Manila.

Still, luck was not on his side, as all his efforts to recover his money went to nothing.

This predicament led Ocaba to seek information and opportunities with the Department of Labor and Employment (DOLE)-10 Camiguin Provincial Field Office sometime in the second quarter of 2020.

With the livelihood financial assistance as start-up capital, Ocaba started his home-based bakeshop, which has already produced 348 pieces of hot Frances and Spanish breads. They have also delivered every morning to the different barangays in Sagay.

With the positive outcome of his business, he was able to hire three delivery boys, who earned 20% of the total sales daily.

Further, Ocaba now bakes cakes for different occasions with an average order of three cakes per week with prices ranging from P350 for ordinary cakes to P700 for special cakes.

However, production of bakery products is still minimal due to the limited capacity of his old-fashioned 'pugon' type oven.

Ocaba’s bakery operations gave him a daily average net income of P1,000. His income is partially used in the gradual completion of his residential house, renovation of the bakery production area, and monthly amortization of his newly-acquired motorcycle for the delivery of baked goods.

In order to transfer his skills to the family, Ocaba continuously trained his nieces in baking by encouraging them to observe and assist him daily.

With the help and guidance of DOLE-10, Ocaba plans to acquire new sets of high quality ovens for mass production of bakery products.

He is also planning to look for a strategic location where he can put-up a display center for his products as well as a refreshments/snack bar or a restaurant in order to employ more people in the town. (DOLE-10/PIA-10) 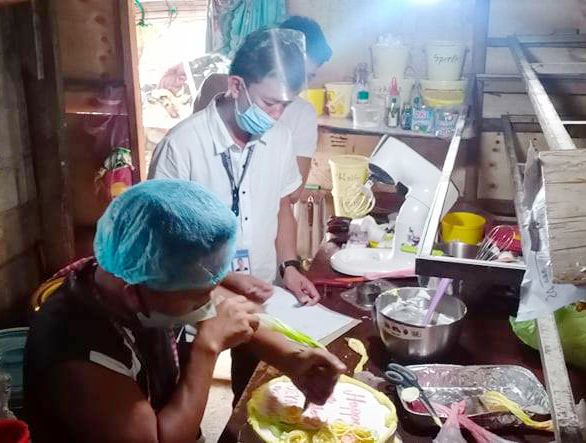