October 15, 2020 at 2:28 pm, No comments
By Alwen Saliring
AUTHORITIES have arrested a former policeman who has been wanted for illegal drug charges in Manolo Fortich, Bukidnon early Thursday, October 15.
Police identified the suspect as Ronald Gaguan, 38, resident of Vista Villa, Sumilao town. His last assignment was in Sumilao municipal police station last 2014 and was dismissed from the service last 2016.
The suspect was tagged as number 2 in the list of wanted persons and a high value target in the illegal drug activities.
Police served the arrest warrant against the suspect for illegal drug charges issued by a judge in Manolo Fortich town on October 9. The court did not allow the suspect to post bail.
The suspect is now detained at the Manolo Fortich town police. 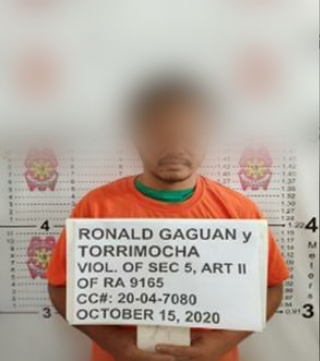