December 15, 2020 at 11:43 pm, No comments
AUTHORITIES have seized several guns and bullets in a raid in Bugcaon, Lantapan town in Bukidnon early Tuesday, December 15.
Members of the Criminal Investigation and Detection Group (CIDG) in Bukidnon arrested Jose Turrecha for alleged illegal possession of firearms after implementing a search warrant issued by a court in Lantapan-Cabanglasan, 10th Judicial Region.
Confiscated were a KG9 Sub-machine gun 9mm Intratec with Muzzle Suppressor; two caliber 45 pistol; a 12-Gauge Shotgun; and several magazines.
The suspect is now detained at the CIDG-Bukidnon's detention facility and will likely face charges for illegal possession of firearms and ammunition (RA 10591). 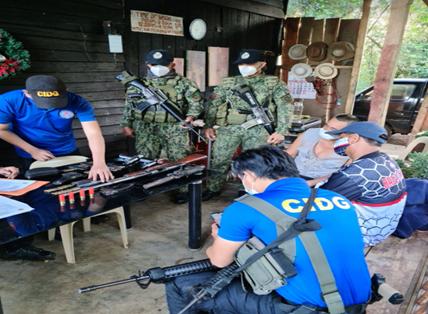