December 18, 2020 at 12:09 pm, No comments
By Alwen Saliring
A MURDER suspect who was linked to the New People's Army (NPA) died after he allegedly fought back against the authoriities in Talakag, Bukidnon Thursday, December 17.
Police operatives were armed with arrest warrant against Richard Munday, for murder and frustrater murder charges issued by a court in Manolo Fortich town.
The suspect was said to be an NPA courier belonging to the Guerilla Front 68 Sub-Regional Command 5.
Investigation disclosed that the suspect, who has been wanted for the said charges, was sighted in Barangay Lirongan, Talakag and armed with a long firearm and hand grenade, prompting the authorities to launch the operation.
Police said the suspect swerved his home-made shotgun and shot two of the members of the Police Auxiliary Unit (PAU) Ricky Ped-ac and Cris Pialan who asked him to surrender.  But, he was hit on the chest after he grabbed and wrestled with the issued M16 rifle of Ped-ac.
He ran towards the nearby corn plantation where he eventually fell on the ground. He was brought to the hospital but was declared dead on arrival.
Authorities recovered the suspect's home-made shotgun and fragmentation grenade. 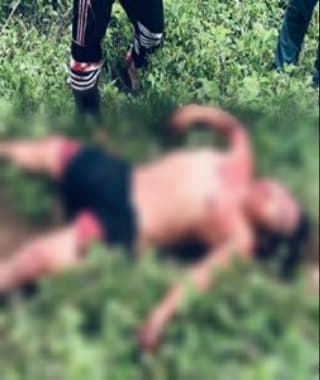