September 27, 2022 at 11:11 am, No comments
Cagayan de Oro Rep. Rufus Rodriguez attended the budget hearing of the Department of National Defense (DND) on September 15, 2022, at the Session Hall of the House of Representatives, Quezon City.

The lawmaker began his interpellation stating that, “The Constitution declares that the primary duty of the government of the Republic of the Philippines is to protect its national territory.”

He asked DND incoming Secretary Jose Faustino Jr. whether the department will “strongly assert Philippine sovereignty in the West Philippine Sea and the 200-nautical mile exclusive economic zone (EEZ).” The congressman reiterated President Marcos clear statement, “We will not give up even one square inch of Philippine territory.”

Faustino responded that the department shall defend our territory and that they would continue to “sustain their efforts to improve their defense capabilities and strengthen defense cooperation” to preserve the country's sovereignty and sovereign rights.

Rep. Rodriguez then requested Sec. Faustino to provide proper relocation to the 500 families residing around the area of the 4th Infantry Division in CdeO before ordering these residents to transfer. The DND Secretary responded affirmatively to this request.

Rodriguez also requested and insisted that Camp Evangelista of the 4th ID in Patag, CdeO should not be transferred to another province which Sec. Faustino also committed.

The CdeO lawmaker further asked the DND and AFP to conduct a visit with him and the House Committee on National Defense to Pag-asa Island to “to show the rest of the world that the island is a part of the Philippine territory, we have the rights under the 2016 tribunal win.”

The Mindanao lawmaker also questioned the DND on its recovery strategy for the P2.1 billion or $38 million advanced to the Russian government for the purchase of helicopters which our government has canceled. The secretary responded that they are “exercising due diligence in formalizing the termination contracts, as well as diplomatic dialogues with the Russian government arising from the project cancellation.”

Rodriguez then moved to approve the entire budget of P310 billion for the DND, plus a P75 billion increase to fund modernization efforts necessary to protect our national security and to keep the Philippine territories intact including the West Philippine Sea.

During the hearing, Sec. Faustino likewise manifested his gratitude to Rep. Rodriguez for his morale-boosting support by giving cash assistance to the Philippine Military Academy (PMA) cadets from Cagayan de Oro City. (PR) 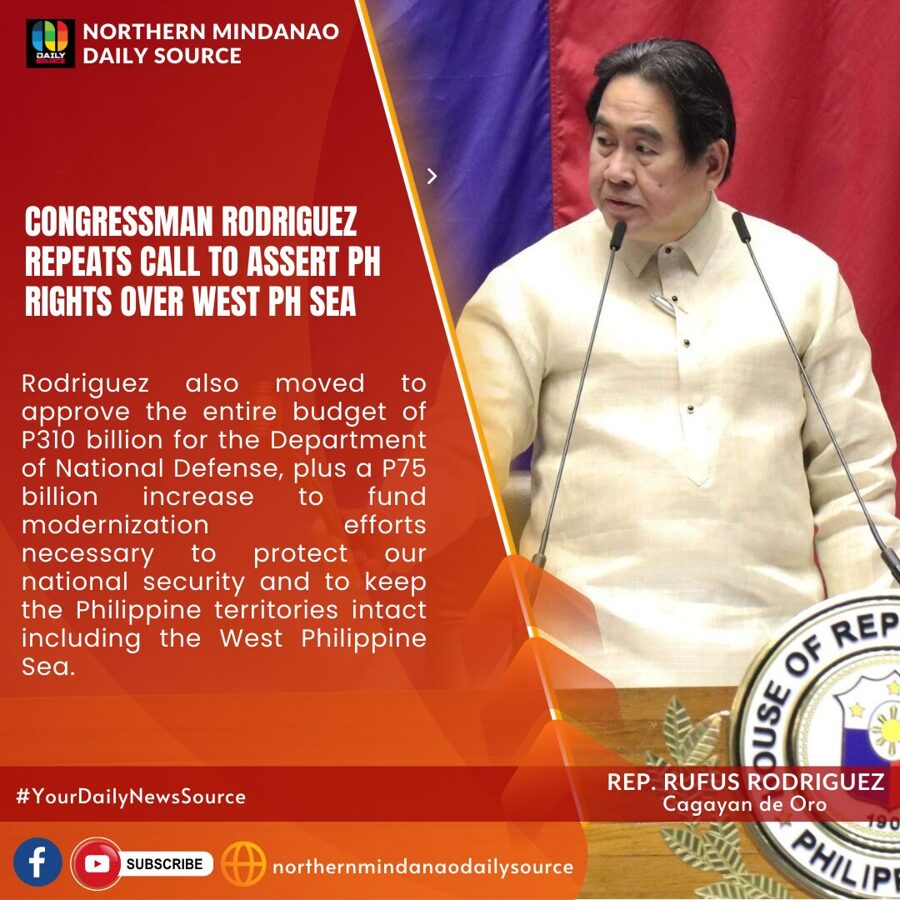