November 28, 2021 at 10:40 pm, No comments
A coalition of evangelical groups recently met Partido Reporma chairman and standard bearer Panfilo “Ping” Lacson and running mate Vicente “Tito” Sotto III in Marikina City, the veteran tandem revealed on Saturday.
The church leaders and members, Sotto said, supported the longtime public servants’ stand on various issues, including on the death penalty, the illegal drug war, the fight against corruption, and the distribution of financial aid under the Bayanihan Act.
In a press conference ahead of Partido Reporma’s “Online Kumustahan” leg in San Rafael, Bulacan on Saturday, Sotto disclosed they had a lengthy dialogue with the evangelicals on a broad range of issues, and came away impressed by the stance of the leading aspirants for the 2022 national elections.
“Oo, napakaganda, mga lider ng mga iba’t ibang evangelical groups ‘yung nandoon—parang coalition ng mga evangelical group. Mahaba ‘yung dialogue namin. Maiksi lang ang opening statement ko sa kanila, napakaraming tanong, pero very supportive sila sa mga stand namin ni Senator Lacson,” Sotto said.
[Yes, it was beautiful, we met leaders of various evangelical groups— like a coalition of evangelical groups. We had a lengthy dialogue. I only gave a short opening statement, they had a lot of questions, but they were very supportive of the stand of Senator Lacson and I.]
Sotto said he and Lacson could feel the support of the broad coalition, which was supportive of their stance on many issues, especially in watching over the nation’s coffers, as the evangelicals were glad that the veteran senators pushed through in running for higher office.
“Sapagkat siguro nakikita naman ng mga kaibigan natin what we stand for, what our track record is, and what we have done. Kaya, ‘yon, pati doon sa ayuda ‘nung tinatanong nila ‘yung… Sabi ko nga, ako mismo nalulungkot e, kasi ako ‘yung principal author ng Bayanihan I and II,” the Senate President added.
[Perhaps our friends could see what we stand for, what our track record is, and what we have done. They were asking us even about the cash aid… I said, even I was saddened, because I was the principal author of Bayanihan 1 and 2.]
Sotto noted that he and Lacson originally proposed in March 2020, at the outset of the COVID-19 pandemic, to put cash aid in the national budget to Finance Secretary Carlos Dominguez, but was disheartened that the financial assistance did not reach all intended beneficiaries, or got less than what they should have.
“Kaya sabi ko nga, kaya kami nagprepresenta na ay ‘yung bantay ng bayan—bantay ng kaban ng bayan na ginagawa ni Senator Lacson at kasama naman kaming sumusuporta sa kanya, siya ang ano… Let him spend—let him oversee and spend the budget of government. Tuwang-tuwa sila. Maganda ang naging resulta,” he said.
[That’s why, I said, we were presenting ourselves as the guardians of the country—guarding the nation’s coffers that Senator Lacson is already doing, and we are with him, supporting him on this… Let him (Lacson) spend, let him oversee and spend the budget of the government. They were truly pleased. It was a good result.]
Sotto, who has spent a combined 42 years in the Senate with the Partido Reporma chairman, added: “Senator Lacson has been the protector of the government and people’s money for 18 years. Imagine if he is the one who is going to execute it, ‘di ba?” So, kung nababantayan niya nang 18 taon, tapos siya ang mag-e-execute ‘non, ‘di ba?”
“So, sa lahat ng mga kumakandidato, perhaps it’s only Senator Ping who can say and who I can say na nag-alaga ng kaban ng bayan at binantayan ang kaban ng bayan nang 18 taon. Kaya, alam mo, pwede naming ayusin at isaayos ang takbo ng gobyerno,” said Sotto.
[If (Lacson) has been watching the national budget for 18 years, then he would execute it, wouldn’t it be great? So, among all the candidates, perhaps it's only Senator Ping who can say and who I can say, who really took care of the nation’s coffers and guarded it for 18 years. So, you know, we can fix it and the way we run the government.] (PR) 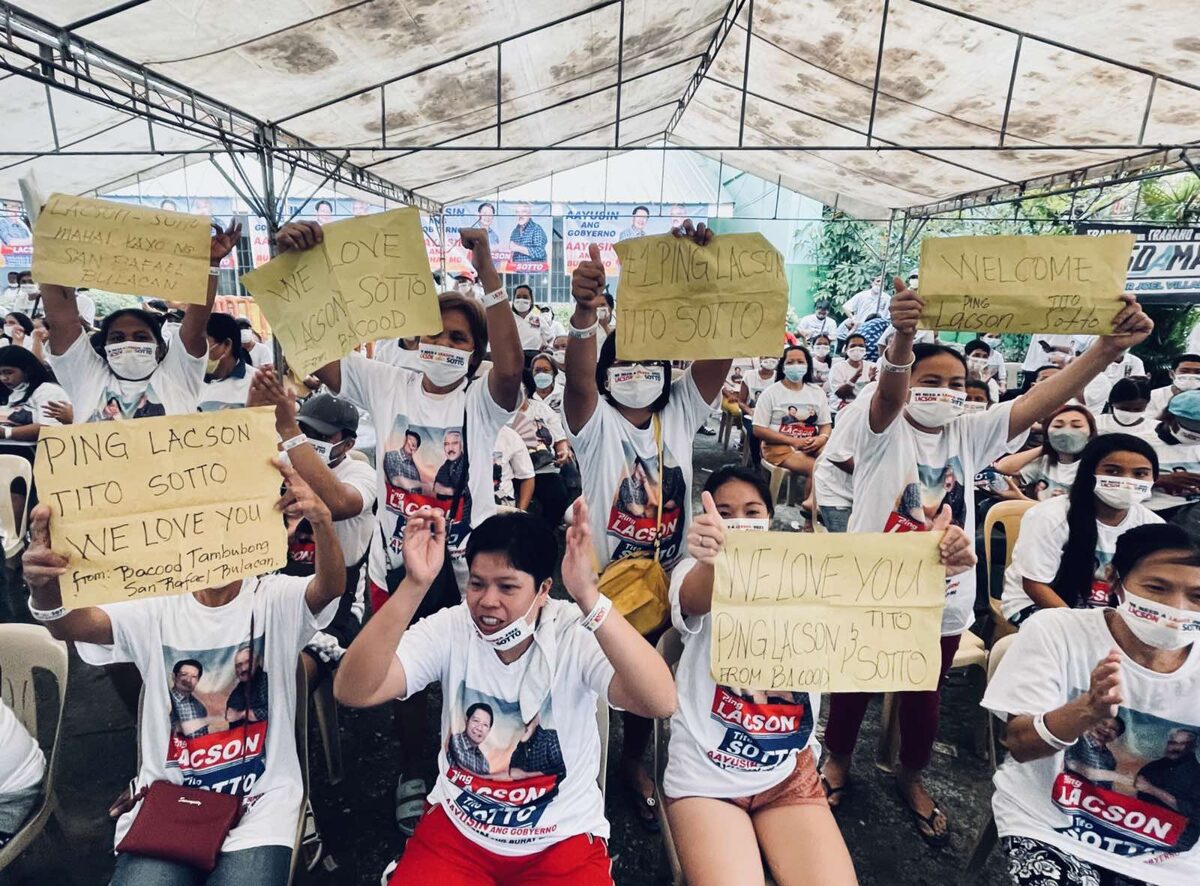