September 4, 2021 at 11:57 am, No comments
By LYNDE SALGADOS
HE may not be as popular and lucrative a prizefighter as Manny Pacquiao is, but Cagayan de Oro's long-forgotten hero Rene Barrientos is legendary  and worth listening to-- when it comes to a plethora of golden ring advice to the younger generation.
For one, the former WBC super featherweight champion had never been floored or tasted mthe rugged canvas in his entire career (1962-1978) marked with 39 wins, including 14 stoppages, 7 defeats with one KO loss and two draws.
In those days where a championship bout is fought for a lung-busting 15 rounds, losing to hometown brewing is common when fighting abroad--which to explain his some losses--and automatically a knockout (KO) when the fight is halted after  one of the fighters accidentally suffered a cut in the eye or from any serious injury.
"That's what happened to my only KO  loss in my ring record kay nasamad ko dapit sa mata. But never in my pugilistic life that i was decked on the floor by an opponent," said the now 80-year-old Barrientos, who's still sharp in memory he could play chess at will in his quite decent place in Mahogany st., brgy. Carmen, Cagayan de Oro.
Yes, Barrientos had never been knocked down nor sent to dreamland atop the squared ropes--for the record.
And that's something the world's only eight-division champion Pacquiao and the late Gabriel 'Flash' Elorde, whom Barrientos had battled once at the Cebu City Coliseum, could envy as it was indeed an act that is hard to follow.
"Except ining cut sa akong right eyebrow dili tatsado akong dagway and until now akong paminaw sa lawas dili bun-og mora la'g wala ko niagi sa pagpamoksing," Barrientos said.
Known as one of the hard-hitting Philippine champions, Barrientos attributed his longevity, durability and seemingly untouchable face, he never had a flattened nose like most retired boxers would appear, to his cunning ability and  preparedness that he always does religiously before every fight.
"I was devoted to my profession that i preferred to be always ready because i know that boxing is a dangerous sport. Kon dili ka manumbag ikaw ang sumbagon. Kon modagan lakgon ka, kon mo-undang peldi ka," said Barrientos. "Daghan tawo sa palibot pero dili ka pwede magpalaban walay motabang sa imo."
As for the 42-year-old Pacquiao's future in boxing, following his unanimous decision setback to the underdog but WBA belt holder Yordenis Ugas from Cuba, Barrientos said it's still up for the Pacman to decide, though "if he'd  ask my advise it would do more good than harm for him if he retires both in boxing and politics."
Barrientos emphatically said: "Politics is the dirtiest game in the world. It's not the right place for us (boxers) that better off relax and enjoy what left for us financially after a tedious struggle for years, sacrificing our lives and limbs due to poverty."
When he first laced on the gloves then when the countrysides boxing in Mindanao would just offer a measly P10 purse for a three-rounder, Barrientos' rise to fame is a unique one he had no Freddie Roach or a Buboy Fernandez as a trainer he was relatively  self-taught and relying always on self reliance.
"You know, common sense is very important in boxing. Sa among time ni bai (Flash Elorde) we used to endure 15 rounds of boxing that we've seen enough of the sport when the call of Father time comes that is inescapable," he told the Northern Mindanao Daily Source.
Like Pacquiao, the five-foot-7 tall Barrientos had a southpaw stance that he used to the hilt to beat the American Ruben Navarro for the world title glory in 1969 before the home crowd at the Araneta Coliseum in Manila.
Before facing Navarro, the local fans had already considered Barrientos as world champion after he pulverished the WBA junior lightweight titlist Hiroshi Kobayashi in their titular duel in Japan.
Barrientos knocked down Kobayashi in the 14th of their 15th-round dukeout, but the referee called it a slip, and the match  ended in a controversial draw.
"In the early rounds kaduha ko na siya gitumba pero gitabla pa," Barrientos said of his bout with Kobayashi who refused a rematch as ordered by the WBA, thereby leading to the Filipino's face off with Navarro for the other version of the WBA crown.
The Aklan-born Barrientos, who settled for good in Cagayan de Oro after marrying the daughter (Antonietta) of his boxing manager Doc Antonio 'Dodong' Almirante, both of them are now deceased, regarded his February 1965 showdown with Flash Elorde as the most memorable one.
Call it as another controversial loss in 12 rounds via unanimous decision, but Barrientos said his impressive performance in Elorde's hometown was enough to gain the respect of the Filipino boxing fans. 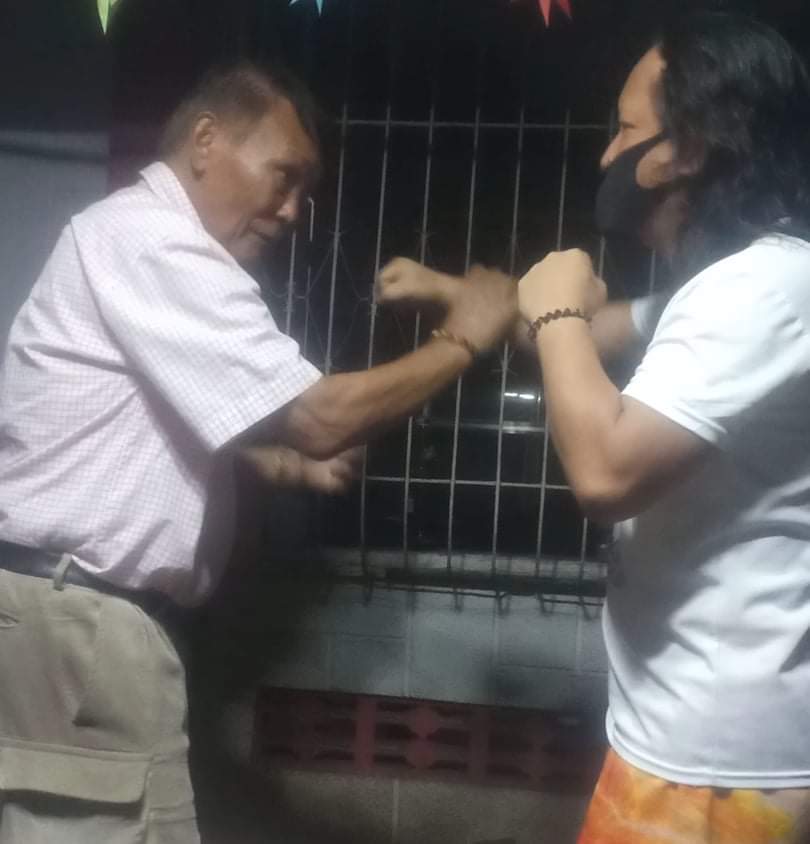 Ageless Rene Barrientos shows off to this writer some of his bagful tricks in boxing.