March 28, 2022 at 2:29 pm, No comments
By Jack Biantan
THE Camiguin-Misamis Oriental Football Association (CMORFA) is slowly but surely assembling a powerhouse U19 football squad.

The team is being formed to hopefully compete in the National U19 Boys National Championship some time in May at the PFF National Training Center in Carmona, Cavite.

A total of 21 of the best young footballers in the region, born 2003, showed up in the first day of trials held last Saturday, March 26 at the Pelaez Sports Complex at the center of Cagayan de Oro City, Misamis Oriental.

Asian Football Confederation (AFC) B licensed coach Ivan Caiña conducted the trials in the absence of newly-appointed coach Jerome dela Peña who was in Cebu for business.

He was a member of the Northern Mindanao team that played in the elementary boys in the  Palarong Pambansa in Albay in 2016. He is an all around player who could play up front, in the midfield or at the back.

Another footballer who showed up was goalkeeper Andre Ebuna of Corpus Christi High School. Ebuna trained for a month in Germany through the Allianz football program.

Cascara,  also a Grade-12 student at Rosevale, is a shifty winger. He played for La Salle in Manila when he was in Grade 10 but moved back to Rosevale School when the Covid-19 pandemic started.

John Gementiza used to study at Rosevale but has transferred to University of Science and Technology of the Philippines (USTP)  for his Senior High School.

Raffy Rubio was part of the Philippine National U16 training pool. He is now enrolled at Corpus Christi School.

Caiña thinks that the team once finalized has the potential to be competitive enough to advance to the National Stage Group.

“However, we have to work hard on our fitness and how we can be efficient with it because we only have 2-3 weeks of preparation for the Regional Group Stage,” he said.

Assisting Caiña during the tryouts were goalkeeping coach Lance Turrecha and young coach Dan Aquino. Another set of tryouts will be held on Friday evening at the same venue. 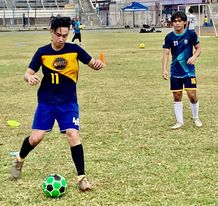